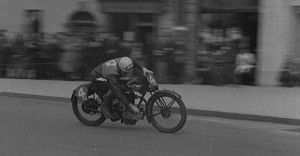 Welcome to the Official Web Site of The Loughshinny Motor Cycle Supporters Club Ltd. We are the organizing club of the famous Skerries 100 and Killalane Pure Road races, held in North County Dublin each year.We hope you enjoy the site, and should you wish to provide any feedback, or require any further information regarding our race meetings, please e-mail us at our new address info@loughshinnymotorcycleclub.com

When World War Two ended in May 1945 and petrol rationing eased, Dublin and District MCC’s thoughts turned to reviving their annual Phoenix Park showpiece, the Dublin 100 Road Race, which had been run from 1931 to 1940. However, when the club sought road closing orders from the Board of Works (then the Park’s controlling authority), it was turned down. The problem was that the Park had been used by the Government as a massive turf dump during the war years and was in no fit state for motorcycle racing, let alone a vast throng of spectators. Tens of thousands of tons of turf were stacked twenty-feet-high along both sides of the Main Road and in the area around the Fifteen Acres. The Park would not be available for racing for several years.

So the focus now switched to Skerries in North County Dublin, where the local Development Association was enthusiastic about bringing a major sports event to the area to encourage tourism, and in late 1945 had approached Dublin and District MCC on the matter (It is worth noting that the international Leinster 200 Road Race was run on the 13 mile Skerries-Rush-Lusk circuit from 1930 to 1935). A joint committee comprising four members each from Skerries Development Association and Dublin and District MCC was set up to promote the event. Mr. Barry Mason a local resident and D.& D. member acted as Honorary Secretary of the organising committee. After inspecting several possible courses in the area a 7.1-mile circuit, using some of the main streets of the town, was selected and so on Saturday July 6th 1946 the inaugural Skerries 100 was held. Run in perfect weather conditions over 14 laps of the circuit the winner of the handicap was 26year old Belfast man Harry Turner riding a 348cc Norton. Bill Bowie was Clerk of the Course and the official programme cost one shilling (about seven cents in today’s money). The day's activities concluded with a very well attended dance in the Tower Ballroom. It was the start of a success story that continues to the present day.

The circuit was reduced in distance again to 2.92 miles in 1971 and was raced clockwise up to 1978. The direction of racing was changed on safety grounds to anti-clockwise from 1979. This course is still being used for the annual race, though a chicane was added on the section between the Tunnel and the Cricket Club a few years ago to reduce the speed of riders and their machines through the start/finish area.

In addition to all the solo classes, sidecars also raced at Skerries from 1980 to 1986, after which they were dropped. It is generally agreed now that the circuit was too narrow for the three-wheelers, but they were indeed thrilling to watch, particularly on the Dublin Corner-Baldungan-Glasshouses-Skerries Hairpin section. Throughout its History the Dublin and District MCC’s committee and members had expressed concern at the amount of work and demand on personal time of those involved in running the Skerries races. On several occasions it was feared that the shortage of willing volunteer hands would put an end to the famous event. However, the problems were overcome until 1986 when the withdrawal of major sponsor Shell left the club with a real dilemma. After agonising on the matter for a couple of months the reluctant decision was taken by the club to withdraw from running the Skerries 100. It was the end of an era.

Just when it seemed as though the famous event had been consigned to the history books, the locally based Loughshinny Motor Cycle Supporters Club stepped in and took over the organisation. It was a courageous decision as they were already heavily committed running their own annual road race at nearby Killalane since 1984.

The Loughshinny Club’s first Skerries race was on Saturday July 4th 1987 on a day basking in blistering sunshine. Steven Cull riding a 500 cc Suzuki marked the occasion by setting a new absolute lap record of 100.04 mph on his way to winning the 15 lap Grand Final. This was the first time a Southern Irish motorcycle circuit had been lapped at over 100 mph.

The event has gone from strength to strength over the years and is now regarded as the premier event in the Republic of Ireland road racing calendar attracting the best of the best. Local hero Martin Finnegan smashed the lap record in 2003 and again in 2004, recording an average speed of 106.774mph during a Grand Final which had the crowds cheering so loud they could be heard back in his home village of Lusk a few miles up the road.

2005, saw the Loughshinny Motorcycle Supporters Club gearing up for the 60th Anniversary of this historic event. Preparations got underway as soon as the last competitor left the paddock at the end of 2004's meeting. The clubs Committee and members got busy designing the souvenir programme sourcing articles and photographs of previous events to fill its pages with memories of this premier road racing festival. Sponsors and advertisers were ‘kicking the door down’ to get involved and the local community once again demonstrated their support by sponsoring a bale and displaying posters in shops and pubs or by sporting a Skerries 100 ‘bumper sticker’ on their car.

2006 saw Cameron Donald take the lap record on his Honda 1000cc he covered the 2.9 mile circuit in just 1min 37seconds recording the first ever 108mph lap or 108.278 to be precise. This year 2009 the Loughshinny Club expects another phenomenal turn out by Pure Road Racing enthusiasts despite the economy crisis and the constant doom and gloom about the credit crunch which greets us every time we open a newspaper or switch on the TV to watch the evening news! Over 40,000 spectators are expected to line the green banks of the circuit for a festival of speed and first class entertainment. The Club has secured a new sponsor for the 2009 main event Grand Final and are proud to be associated with Aon bikecare an established company which offers a comprehensive portfolio of insurance cover designed specifically for bikers.

Preparations are being made to welcome the biggest names in Road Racing and riders from all over Ireland and the UK will be joined on the grid by riders from the other side of the world who have already returned their entry forms for this prestigious event.

The Martin Finnegan Supporters Club are celebrating news that their wish to rename Dublin corner 'Finnegan Corner' has been accepted and they will be sponsoring one of the most competitive races in the programme the 401cc - 750cc Support race in memory of the counties local hero.

The Loughshinny Motorcycle Club Committees work is never done, with two annual events to organise the committee meets 50 weeks out of 52 every year. During the weekly committee meetings, held every Tuesday night in the Yacht Bar and Chaired by Tony Carton, progress reports are delivered by those club members who have volunteered to be responsible for such things as Road closure applications, Medical support, Circuit advertising, Circuit preparation, Race paddock management, Sponsorship, Programme advertising, Car parking, and liaison duties with local Authorities and the Garda to name but a few. Without these dedicated individuals who unselfishly sacrifice their own time to the club the Skerries 100 and Killalane events could never happen. They are an eclectic group of people from all walks of life who share a passion for motorcycle road racing at its best. Competitors and Spectators alike get the chance to meet them at either event and many take the opportunity to say hello and thank them for organising such great sporting spectaculars.