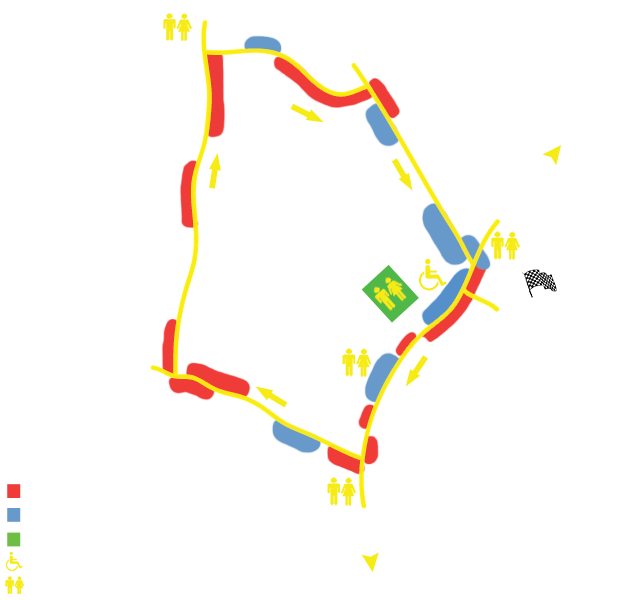 The Killalane Road Races first took place in 1984, and were the first races organized by the Loughshinny Motorcycle Supporters Club. The Kiilalane Road Races have taken over from the Carrowdore as the last road race of the Irish season, which means that exciting racing is ensured as the competitors battle it out for a result which could net them a championship win. In it's short history, some of the top names have ridden a Killalane including Joey and Robert Dunlop, Mark Farmer, Steve Cull, Sam McClements, Phillip McCallen, Dave Leach, James Courtney and Owen McNally. The Course is almost side by side with the Skerries 100 circuit and actually uses about 100 meters of the same road. 3.6 miles long, the Killalane track is even narrower than the Skerries circuit in places, and at one section you will find a tree in the middle of the road!

Slightly longer than the historic Skerries 100 circuit at just over 3.6miles Killalane is a very fast road racing circuit with a lot of long straights. Unlike the undulating Skerries 100 this circuit hardly changes in elevation throughout its entire length being mostly flat with only the occasional dip waiting to surprise any rider who isn't concentrating 100%. Most spectators tend to congregate within the area between Schoolhouse Road straight and the Paddock gate. Ryan Farquhar is the current lap record holder having put in a blistering lap of 112.704mph, Ryan belongs to an elite group of riders who have held both the Killalane and Skerries 100 lap records at the same time. Please remember that motor sport can be dangerous. You must obey any instructions given to you by event Officials or Marshals. Stay out of prohibited areas and behind barriers . Only walk in areas that are marked out as pathways. Always respect local land and home owners private property. Do not enter fields or gardens without permission. Always take all your rubbish home with you. Keep children under supervision. Do not wear brightly coloured 'HiVis' bibs or jackets around the course as these can distract the riders and do not wave flags or such things as umbrellas as they can be mistaken for important signals from the course Marshals. Anyone deemed to be behaving in an unsafe or disruptive manner will be removed from the circuit area. 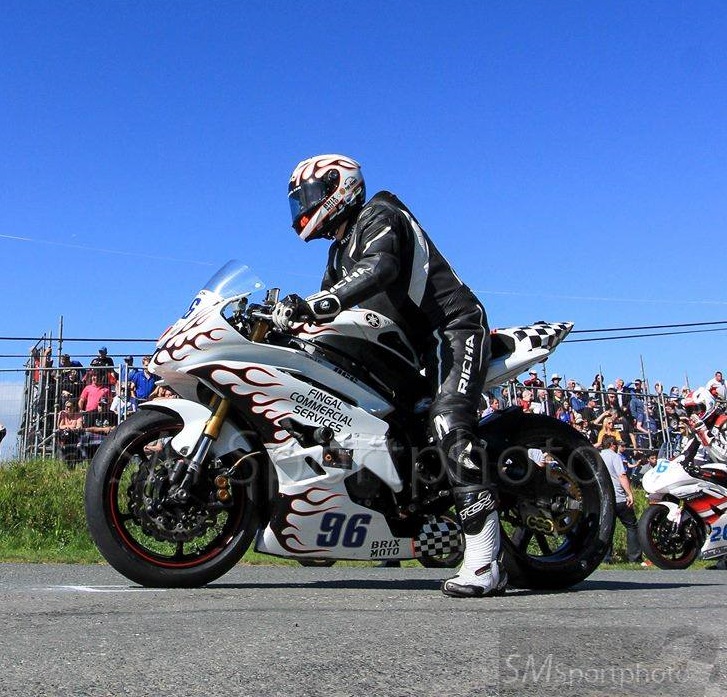 Andy Farrell on the line waiting for the Flag

There is a scaffold spectator area opposite the Start/Finish line which sits right on Finnegan's corner. The area between the Start / Finish line and the paddock gate does offer some spots for viewing but you'll have to be there early to get in behind the hedge or you will only catch a glimpse of riders as they flash past you at great speeds. If racing is close then there'll be a few overtaking moves made along this stretch of the circuit. Please be aware of the prohibited sections in this area and adhere to any requests from the Marshals as this is fast! 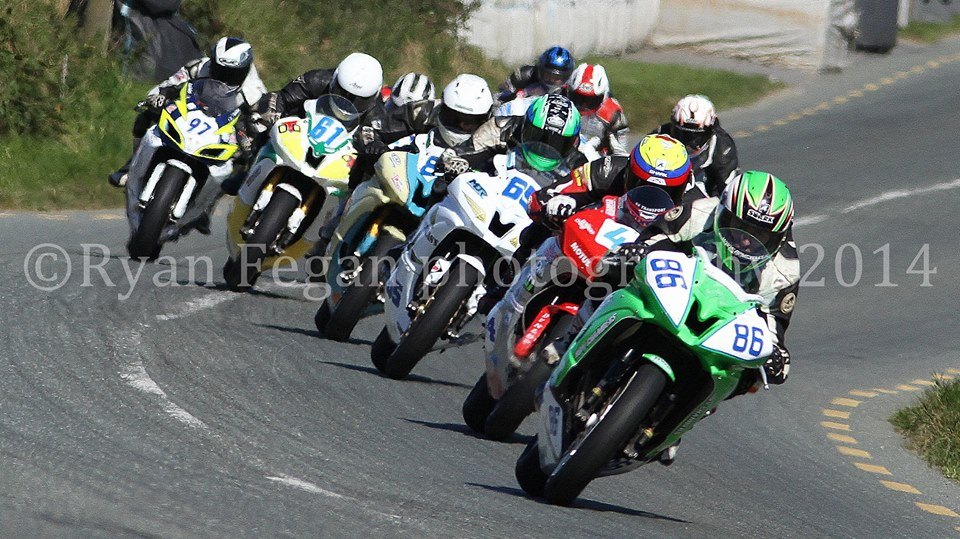 From the paddock gate there is viewing on the right hand side on the run to Kennedy's. The hedge has been cut and the bank raises to form a natural platform where spectators can watch riders flash past at high speeds whilst cranking their machines over into the long left hander that takes them down to Kennedy's Corner. Many a brave out braking manoeuvre is attempted on the fast approach into Kennedy's as riders psych each other out before tipping into the sharp right hander. Don't be tempted to stand in the runoff area here as the odd inexperienced road race spectator often tries, yes we get a few every year who don't realise the dangers of standing in the wrong areas! Riders who overcook it a little on the run into the corner end up heading straight for Lusk on the R127! 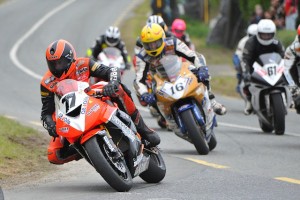 Huge handfuls of throttle as the riders attempt to get the power down as quickly as possible on the exit out of Kennedy's. The run up towards the Man-O-War is a fast top gear flat out sprint. Half way along this section of the circuit some of the riders will roll back on the throttle a little as they are presented with a quick right - left change in direction, those riders who know the circuit well will keep it pinned! Good viewing spots are few and far between on this section of the track but if you can find a spot in behind the hedges you'll see some high speed action. The fields in this area often have growing crops in them and we ask any spectators here to respect the owners property and crops. 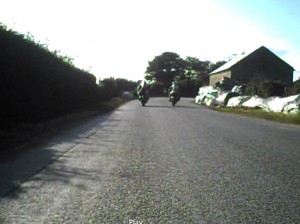 The Run Down to Halpin’s Cottage

A challenging exit from Man-O-War corner see's riders accelerate downhill through a couple of quick right - left - right corners before climbing again past Halpen's Cottage for the approach into Killalane Village. Viewing is very restricted here as the circuit is flanked on both sides by deep drainage ditches and high hedges there are also a number of prohibited areas for safety reasons. 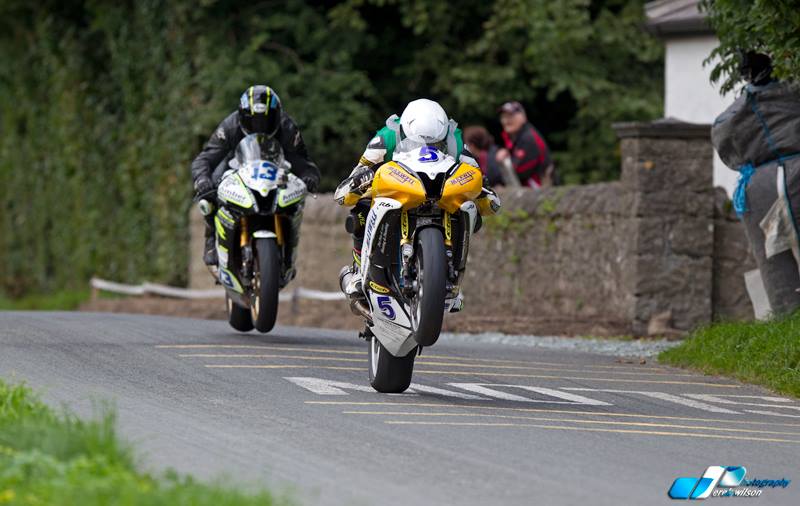 The residents of Killalane claim this road race as their own and many of the families in the village have strong links to the sport of motorcycle racing. The Killalane weekend is a great excuse for them to light up the BBQ invite a few friends over and have a bit of a party. You'll find many areas through the village are prohibited or for residents access only but you'll also find a few of the residents who welcome complete strangers to join them in their gardens to watch the fantastic racing action that takes place on their front door. If you do wander into the village please respect the property and privacy of the residents, don't enter onto anyone's private property unless invited to do so by the owner. Please remember that without the goodwill and support of all residents around the circuit the club wouldn't be able to stage this great event. 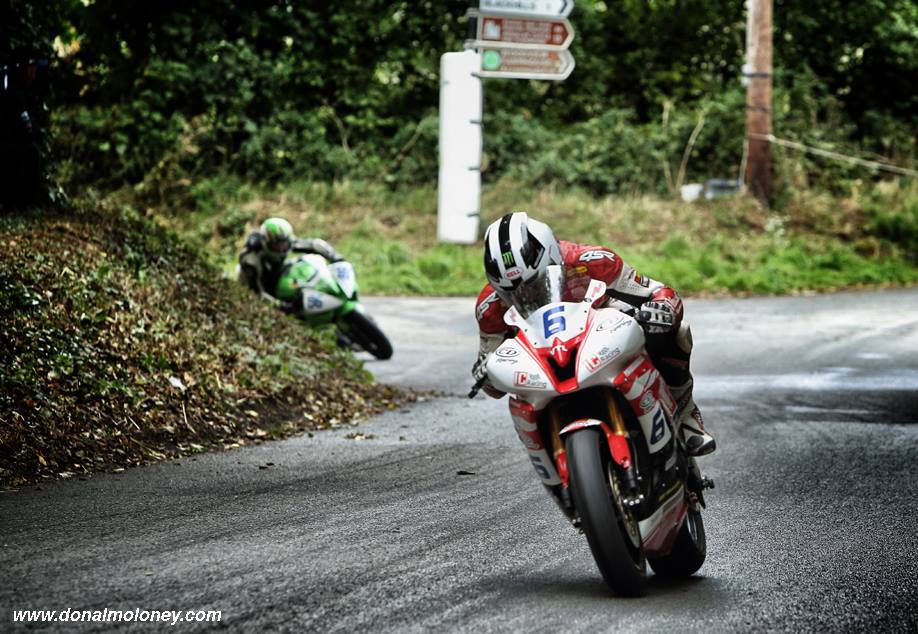 On the exit out of the village there are a couple of spots on the circuit which tease the front wheel of the bikes into the air. Riders have to be wary of these as they need to set themselves up just right for the tricky approach into the right hander at Kearney's tree. We claim to be the only motorcycle club in the world which organises a motorcycle race with a corner on the circuit which has a tree slap bang in the middle of it! If you know of any other road race with a similar peculiarity then let us know! Don't worry the tree is very well protected by safety bales and all of the riders know that it's there! Newcomers take note!! It is possible to find a spot at Kearney's tree to spectate from but these viewing spots are very limited. For anyone who hasn't been to this event before it's a must to pop down to this famous corner at some point just to have your picture taken in such an unusual location. 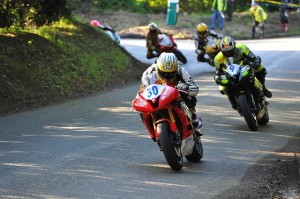 The run down to St Movee corner has a couple of long sweeping bends on it. Viewing spots are very limited because of deep drainage ditches and high hedges. Comfortable grassy banks for sitting on are very rare on this part of the circuit and there are a few prohibited areas for safety reasons as the bikes are travelling fast and making one or two changes in direction as they head towards Schoolhouse Road. 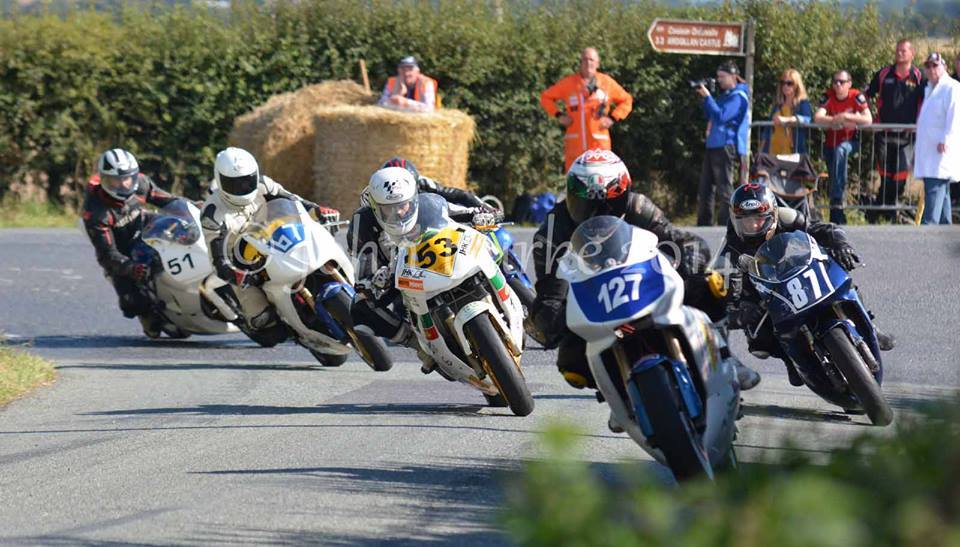 Probably one of the best areas to catch a glimpse of the riders. Easy to get to and lots of spots to set down comfortably for the day. Just at the top of Schoolhouse lane is a small private cemetery the club asks spectators to the event not to enter this area or even sit on the boundary wall, please respect the dignity of the area. As with most of the Killalane circuit there is a drainage ditch which runs almost the entire length of this fast straight. Spectators must stay on the outside of the ditch, that is the furthest side of the ditch from the track. The best areas are on the infield that is the area which is on the opposite side of the circuit to the National School. Close to the St Movee turn there is a deceptively tame looking rise in the road you'll find it just where the bikes emerge from the tree tunnel at the end of a row of cottages. This is Killalane's equivalent to Sam's leap on the Skerries 100 circuit so if you like to see lots of airborne bike action this is the place to see it. Finally onto the School House Corner and from here it is a sprint for the line. It begins as soon as the riders exit the Schoolhouse Road corner onto the Skerries to Lusk road. It's a short frantic dash for the line as the riders attempt to get every last bit of power to the back wheel and take that chequered flag. 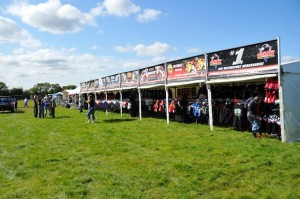 The Killalane Road Race uses the same Paddock as the Skerries road race event and always has the same great atmosphere and great craic! Here you’ll find all the riders, their machines and their support crews. Many of the riders are happy to chat with spectators and sign autographs whilst they are in the Paddock but please remember the riders are here to race and they do need some time to themselves between races! If you arrive early for a wander around you can drop by the Scrutiny tent to see the riders bringing in their machines to be checked out by our team of qualified scrutineers. All bikes must pass this important test before they are proclaimed safe to race. Other things such as the riders helmets and leathers are also checked before they are cleared to compete. The prize giving ceremony takes place in the Scrutiny tent immediately after all the races have been run. This is your opportunity to snap of few good photographs at the podium where you can get up close and personal with the riders! You’ll also find a host of traders in the Paddock. Clinton Enterprises Ltd will be selling the official Country Crest Killalane Road Races T-shirts and various team wear in Motorcycle racing, so do look out for race day bargains. Each year we invite along a host of traders to set up in this area so make sure you pop along to check them out. Food and Beverages will also be available from our catering team and Facilities here include Toilets and washing cubicles. We have an Adults and Kids play area and we hope to have different activities throughout the weekend. Country Crest will also have a wonderful display in the paddock. Don’t forget to come at the end of the day, where we will be interviewing some of the riders at the podium followed by the race winners receiving their trophies after a hard days graft. Make sure you take some pictures as a memento of your racing weekend.